Just a little warm up swim. The plan was quick ride and then a swim. Well let me say the first 50km on the bike was great then we hit the North winds on the way home. The second 50km was hard work. After the ride I grab my new Blueseventy Helex wetsuit and headed up to St Kilda. I caught up with Amy, Leanne, Sharyon, Mary, Sharon, Suzie and Chris.

After picking up our rego kits we changed dropped our bags off and headed down the beach to the swim start. The day was warm I couldn’t wait to get into the water to cool off.

After a warm up swim the 2 waves lined up and off we went. The washing machine of bodies, arms and legs as we headed out to the first turn buoy and then up towards the St Kilda pier. Along this leg there were a heap of Jelly Fish along with head wind/swell, during the leg I managed to pass many other competitors. At the final buoy I turned for home and swam into shore, as I found the sand I did a few dolphin dives and pulled myself out of the water and run up the beach and over the line.

After racing yesterday I grabbed my other wetsuit and headed down to Mentone for the first of the Great Victorian Swim Series. First off I picked up Great Vic Swim Pack followed by my Race Kit. After picking up my Race Kit and caught up with Nicole (aka Aqua Girl) and Pete who runs Swimwell Open Water Swims. Due to the long rego lines the swim start was pushed back. During this time the wind started to move from North East to Southerly and the swell started to pickup, it didn’t worry me too much. During the standing around  at the start line I caught up with Pete, Sally, Paul and Megan from the Mentone Swim Squad which I swim with and Nicole from various Swims and Tri as well as Pete from Swellwell who was running the bag drop. We wish each other good luck and off we wonder out to deep water as this race was a deep water start.  We all lined up and the horn sound and off we went. Up the bay we swam, I swam over a few peeps and found clear water and got into a stroke rhythm. I remember seeing the Life Saving Club on my left which was approx 1/3 way through the race. As we got further up the bay I saw a purple buoy I thought this was my turn can, but in truth there was some another 500m to go before the turn buoys.  As turn around these buoys to head towards the final buoy before hitting the beach. At this point I had passed another swimmer but she sat right on my hip, but as the swell had really picked up she got pushed on top of me. I increased my stroke rate to gain a few meters on her. At this point the usually quite Mentone Beach turned into surf beach. Everyone still swimming was getting dumped in the waves that where breaking. However I felt comfortable in these conditions made it to the final buoy body surfed in and run over the line.

It was one of the toughest swim long distance swims in my life but I had fun. 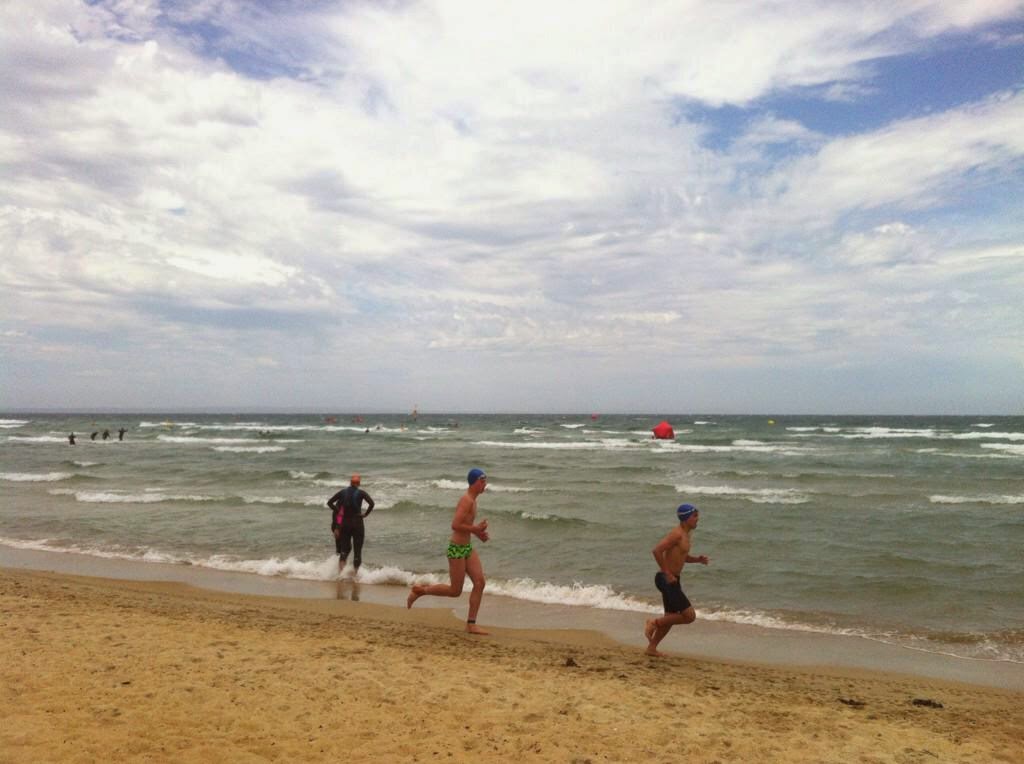 I have never done this swim, but thought it would be something different and in addition it was true open water not what like in the bay but in the ocean and at a true surf beach. This event is a 1.2KM swim smaller than the other two, but still none less different. Box Day in Melbourne was not a warm sunny day by any means. It was windy from the South and cooler than the previous few days. It was halfway point for our Tri Clubs Hell Week. There was no way I could get a ride/run/swim done before having to be at Point Leo for 1pm start, so I did put in a short run from home first. On the way down to Point Leo it start to rain and I mean rain. The car reported the t temperature to be 12c and I would feel the wind pushing on the car on the trip down. Once I got off the freeway and on the back roads to Point Leo, the sun came out the wind seem to drop away a bit and the temperature to 16c.  When I got to Point Leo I parked and headed down to the registration area picked up my race kit and checked out the scene, The Swell was up there it was going to be some fun times in the water. I watched one of the Nipper Races and then went back to the car to drop off the free T-Shirt, etc and grab my Wetsuit, goggles, etc. I still had time to kill so I found a nice quite spot on the grass in front of the café and had a little kip. Before heading back down to the Life Saving Club to change and head down to the water.

When I got down to the beach zipped up my wetsuit and I jumped straight in for a warm up swim. The first thing I noticed was the swell, it reminded me of Mentone, but this was going was fun. You had to dive under the breaking swell/waves so not to get dump back towards the beach. I got some 200m without too much effort and then swam back in and body surfed into the shore. They, the Life Saving Club, ask us all to come to the race briefing due to the conditions. I could feel my heads getting cold from the wind and them being wet. Thank god I had my full sleeve wetsuit on. It made all the difference.

The first wave went off and I went in again for another warm up swim. When I came out I saw Nicole and said hi and good luck. We where both in the same wave, we lined up and waited for the gun (shotgun) to go off and out we headed. I swallowed some of the ocean and found it really hard out to the first two buoys, but once turned  to head up the beach I felt a push. I swam up the buoy at the top of the beach turned again and headed back to the final turn buoy. Everyone basically turned into the beach and had to run approx 250m along the beach to the finish line.  I felt the waves pulling me back as they were about to break so I backed off then push/surfed as they broke into the beach followed by a sprint up the beach to the finish line. 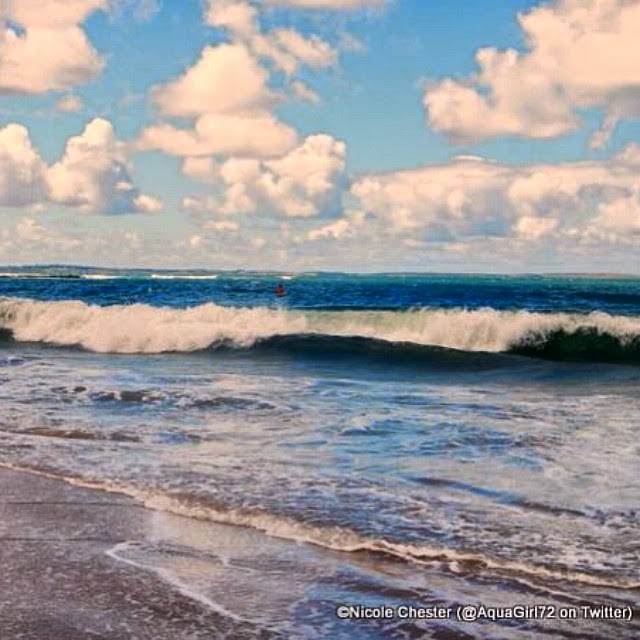 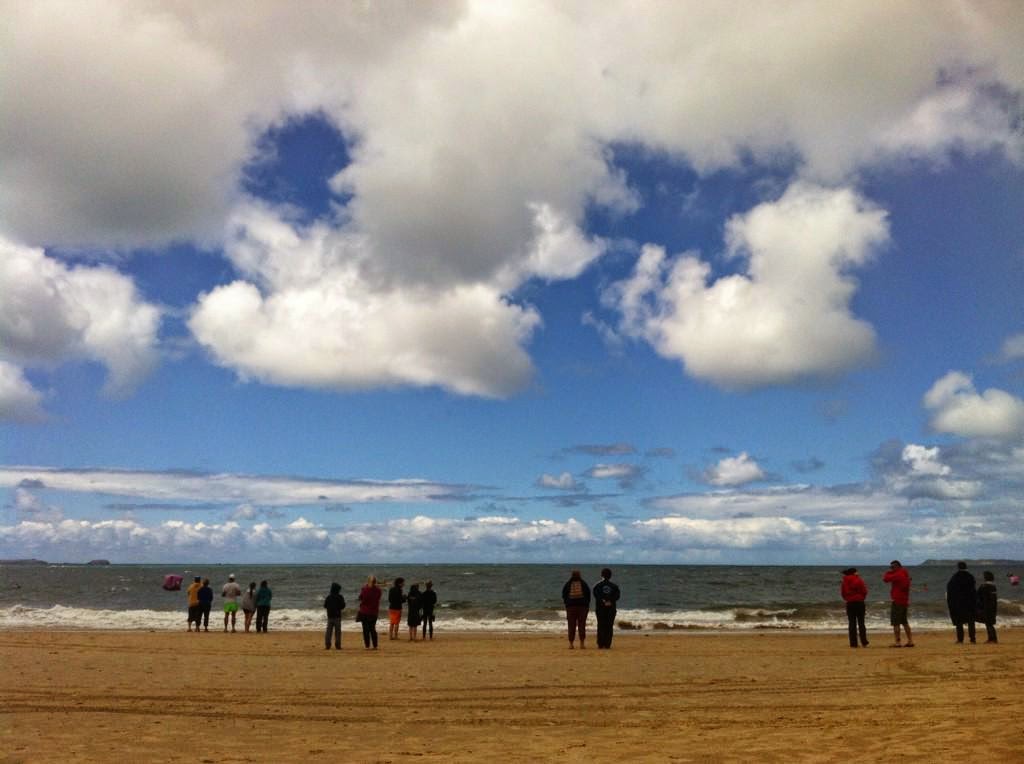