Well what a week. New Year and the first Tri of the year, new gear and a PB.

Friday after work on the way home I was passing Green Point and saw Coach Ollie and Sarah along with Emma putting up the TA Taj Tents. I stop and offered my help, little did I know that a facebook call for help had been put out. A few more TA people rocked up and we had the tents up in no time.
Saturday was going to a big day,  Brighton first up a formularization of the course, ride to Black Rock and back, run 1km out 1km back then a open water swim. Also gave me a chance to test the new Garmin 910XT. All went well until the swim, I grabbed the first pair of goggles only to find out in the bay they leaked. Saturday there was a bit of a swell and trying to fix them was not going work oh well some Polo practice. After getting out of the water and checking them out they were basically stuffed. After the
session we all headed up to Brighton Baths for a feed.
Later that day I then headed down MSAC for SWIM STROKE CORRECTION (INTERMEDIATE). I did Ryan's program last year and got great improvements out of the program so when this came along I signed up. Ryan basically smashed us, my shoulders were so sore when I went to bed. One of the final jobs of the day was to put the race wheels on the bike.
Sunday morning race day! Got out of bed at 5am, bit of breakfast, shower, grab the transition bag, bike, etc and head off to the race. When I got to Brighton and unpacked the car and headed down to TA Taj where I had forgotten my sunglasses, so a trip back to the car, Not a big one I must still be in holiday mode.
Went to transition put the bike in, setup, etc. then drop my bag back at the Taj. We had a newbie (first race) so I went with her to transition and helped her setup everything.
After that I had a few mins to chat and then get ready for the first full Tri of the season. One of the coaches did say does anyone know what do in a triathlon?
On with the wettie, I took both the full and sleeveless I ended up using the full wetsuit. 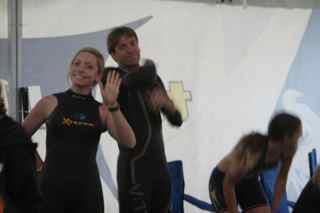 On the way down along the beach we saw Coach Sarah come out of the water and run up to transition I managed to get a practice swim in with 5mins to spare before my wave race start. I went up to David (aka Santa at the last race) and said "Thanks to Santa for the better weather" David had a good laugh about it. It was race time, game face, I have had some horrid starts in the swim which freaked me out and others no issues. This one was good little chopper going out - not bad, got the first marker and then it was much better  going across, our wave caught up with a few of the slower swimmers from the previous waves this gave me a really boast my open water skills are paying off. Came out of the water in 11mins. I was happy with that, then the run into transition and out on the bike. First mistake, just didn't get the mount right, not a big one but was in front of the team tent. Lots didn't get it right which suggest we might be doing some transition practice. The bike was a little slow going south due to the easterly wind, but come back was fast. I completed two laps in 37min 10 secs prefect dismount and into transition. Race wheels worked perfectly. on the socks and shoes and out for a run. Down to Sandringham footy ground and back, after I turned around I saw coach Sarah doing a cool down run at 3km marker I looked at my watch and saw that I was on track for sub 1hr 20min finish. My goal for sprint races this year. I finished the race strong and felt pretty good overall.
My watch time was 1hr 18m 8s official time some 4s a new PB for this distance for me. Could be that we swam, could be the race wheels on the bike, could be the training, could of been hell week that Tri Club put on, could be the engine, could be all the above.

Gear Report
Race Wheels - great feels fast and times seem to say so.
Garmin 910XT - Same as 310XT but lighter and slimmer. The Swim functions (both Pool and Open Water Swimming) make the watch worth the $$$$
Next Race? Great Australia Day Swim at Brighton Baths on funny enough Australia Day.
More pics of Race 3 to come.
Posted by Simmo at 9:13 PM