As I sit here in Noosa getting ready for the Triathlon this weekend I thought I would type a race report for the Melbourne Marathon.


The Melbourne Marathon was always going to be a B race and a good lead in to Noosa.


The morning was chilly but would warm up quickly so T-Shirt, Shorts and light arm warmers where called for. With over 30,000 people racing my running buddy Ellie and I headed in early and found a park around the Tan on Anderson Street hill. Approx 15mins walk to the start line. So we headed off on the way a quick bath room break along the Yarra, I always hate queuing for the Portaloo’s  let along the smell.


We got to the start line did a warm up and stretch and waited to go.  I looked at the course map the night before but I must say it didn’t give a good layout of the course just the start and the finish any with this in mind I became a sheep, just follow everyone else.


As we started it was the typical walk for a bit before you could get really running once I held a pace that I felt good about and let the rest “run off” I’ve always had a problem of running out too quickly then paying for it. Over the last few runs I’ve been better that fixing that mainly due to Mr Garmin.


We headed up from Rod Laver Arena towards Flinders Street and down to St Kilda Rd and around the Arts Centre back under St Kilda road up around the Tan back to St Kilda up to Fed Square and out the walk way to the MGC. Down and loop around and up along Bunton Avenue to the  turn around then back to the MGC and then on to do an almost lap of the MGC to the finish.  As I came around towards the finish I heard from the grand stands someone yell out “Go Simon”, later on I found it was Narelle one of the TA team mates waiting for Hubby to finish the full Marathon.


The next week saw me come down with a head cold so I took the week off and the following week did a little ride with the group on the TT with a run off the bike which was the not the greatest as I was still a bit sick. So kept it simple and didn’t over do it for the week. Last weekend saw the last full hit out. A few of us headed sound to Safety Beach for a Ride/Run/Swim training session, Ride was to Portsea and back followed by a run off the bike then a Open Water Swim. The session felt great the water was cold but once going was good to get an open water swim in.


TT was  packed up the bike into it’s case ready for the trip up north. So I passed bike packing 101. 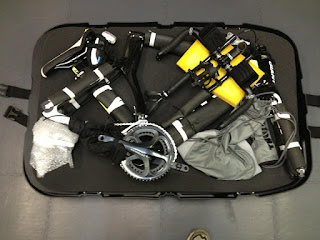 So yesterday we got to the Airport bags checked in, bike checked in and the plane with 9 other TA crew for up to the Sunshine coast.  When we arrived and while waiting for the bags to come off the JetStar flight came in with another bunch of the TA crew. Our bus driver said that in the Virgin flight there were some 18 bikes and we know another 45 on the Jetstar flight. So it’s going to be a big weekend.


Once I arrived my first thing was to check out the bike I didn’t want any surprises. The bike had arrived in one bit no damage, so the bike was re-assembled. I had officially now passed Bike flight 101 and Bike re-assembly 101. Thanks to Coach Emma for some tips.


Coach Sarah had sent out a training program for us. Yesterday was swam the swim course (non-wettie) and it felt great water was not cold, but you could not see too much, but I felt good in the water.


Today’s plan is for a ride over the course and this afternoon a run. The ride was great the course is interesting but the ride felt good. I feeling good about the weekend I have only two goals for this weekend. 1 to finish and 2, to have a good time. So far the trip is a blast the place I’m staying in, The Outrigger Noosa, has been built right in the middle of the National Park with great views.