Escape From Alcatraz Race Report! YES do it

Yes, I'm quoting baseball coach Jimmy Dugan (Tom Hanks) from "A League of Their Own," who famously said,


"It's supposed to be hard. If it wasn't hard, everyone would do it." Feeling like you've done something few would try gives you an enormous sense of accomplishment.


Prison ID #826 (me) - Successfully Escaped Alcatraz Tri. Some people say I should be locked up and through away the key.


To me this was a bucket list race for those who know me I have spent 5 or so years trying to get into this race and while sitting in an apartment back in Busso with Pam, Fikriye and Sam last (2017) December I got an email saying that my Ballot slot had been accepted. Escape from Alcatraz is an icon event in the USA like Noosa is to us in Australia.


I arrived the Tuesday before the race spent some 17 hours travelling from Melbourne to San Francisco via LA. The trick is to get over the Jet Lag as quickly as possible. As I arrived late Afternoon, I did a quick walk around the area, found the local Supermarket purchased some food and
Walgreens and I got a prepaid Sim Card. Early night as the following day was the tour of Alcatraz Island and in the afternoon tour around the town.

On the Wednesday I made my way down to the pickup point for the tour. Before we boarded the boat the drive took us for coffee along the piers. This was the first time I laid eyes on the San Francisco Belle the boat that would take us out for the swim. After getting off the bus I made my way to take a photo of the Belle before getting back on for the Tour of the Island. The tour of the Island is interesting there are two types of tours one with the guide and the other is talking audio tour spoken by the Guards and Inmates of the day. Also gave me a first view of the swim back to the main land. The wind and swell was up and I thought this would be a challenge. As it got closer to the race day the winds dropped away but picked up in the afternoon.


The following day, Thursday I did my first run of the area. I ran from the Hotel to transition and took a few photos and run back. That afternoon I did some more exploring of San Francisco. Friday morning was bike pickup day I choose to hire a bike instead of taking mine over. Pickup being at 11am I made my way up to Dolphin Swim Club area, where lots of other Triathletes where and we will where getting into the water. I bumped into a guy from Colorado and he said, it's that time, time to get in. Once I got the wetsuit on, thermal cap, swim cap and goggles and in I went. The water was warmer than I thought it was going to be. Later on I found it was 15.5c as compared to the last swim in Melbourne which was 12.3c. I put in 1km swim felt great. Later that morning I picked up and bike went back to the hotel change into Cycling kit and headed out. I road down to the Golden Gate, over the Bridge and back again. The bike was no high end, but would do the job.


Saturday morning I did another short run before heading down to transition for kit pickup and goodies pickup. They also did one of 2 race briefings which I attended. They have 6 steps. 1. Confirm your USAT Insurance, 2. Pickup for your Race Packet, 3. Timing Chip, 4. Event Bag and Athlete T-Shirt, 5. Body Marking (i.e. Race Numbers) and 6. Goodie bag which we choose after pay our race entry fees.

After complete this I walked back to the Hotel, got all my gear ready, early dinner and early night.


Sunday Race morning. I set no less than 3 alarms, no way I was going to miss the bus. I left the hotel at 4:30 for the 10 or so min ride to transition. Found my rack place set my bike and all my gear. On my way out of Transition I asked a Escape from Alcatraz Event person about where to drop my bag.
Turns out that you are allowed to leave bags in Transition. Very different in Australia. After placing my bag back into Transition I headed out to the buses for the ride down to Pier 3. The bus arrived and we got off and lined up to get onto the Belle. My age group was on the 2nd level around 5:30am  they allowed us to get on the boat. I found a pole to sit down and prop myself up and wait for boat to push off. Lots of nervous talk and energy in the room. As the Capitan came over the PA and announce that they were casting off and setting sail. The cheers from the Athletes said it all, this was happening. We sailed out found our place the American National Anthem was sung and the pros went off, about 1 minute later the ships bell sounded time to empty the boat 2500 Athletes made their way through one of 3 doors over the timing line, 3 or 4 steps and then a jump of faith. I personally did the Australia thing, a bomb into the water. When I came up for air I did a quick check goggles still on I was about 2ish meters away from the boat I started swimming towards shore, I aimed for the Dome at the Palace of Fine Arts. About 500m in I stop rolled over looked up at all the athletes swimming and the Belle in the background, San Francisco in front of me took it all in rolled over and started swimming again.


The currents are strong like you feel if your swimming Portsea or Sorrento. The swim is a 1.5 mile or 2.4KM. Once you get out of the water there is a half mile run (800m) To Transition 1 same as we see at St Kilda. I found my row by the house and Nations flags got my wetsuit, etc. off, Helmet on, grab your Bike and head out. Racing in Australia you need to keep in mind you ride on the wrong side of the road. I kept Right unless passing, the roads are bad, lots and lots of potholes. The Course is hilly, not really a TT bike more suited to Roadies, with that said lots of people  did use TT's. The course heads out under the Golden Gate down towards Ocean Beach and Golden Gate Park. The back towards the Marine Park for the Run.


Once you get past this it's more or less a downhill run towards the finish line. 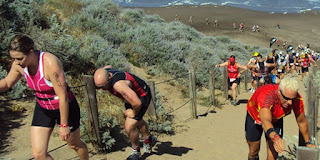 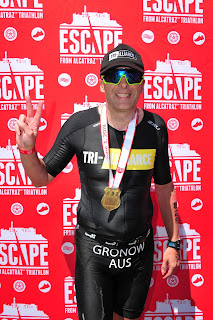 Thanks to Elicia for keeping my body moving, Luke for the training sets, Ollie for the Logo for the Custom Trisuit I had make for the race and the programs, the Greg, Ashley, Mario and the Long course crew thanks. Thanks to Peter for the those cold open water swims at Half Moon well worth it.


Thanks to the TA Crew and Friends who sent me messages of support special thanks goes to Fikriye and Pam for long hilly crazy rides we did. 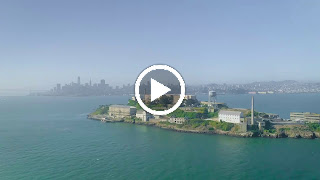 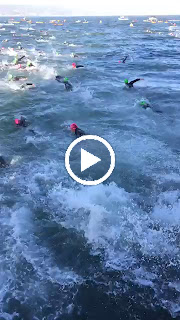